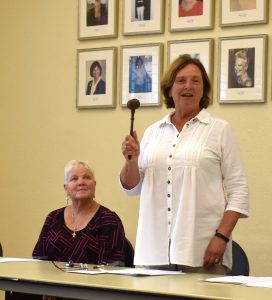 Marty McFadden is the new president of the Boca Grande Historical Society.

Board members of the Boca Grande Historical Society elected new officers, as well as discussed other business affairs, at the annual meeting on Tuesday, April 9 at the Boca Grande Community Center.

“It’s been a terrific year for the Society,” McFadden said. “Our book sales are up and things are looking really well.”

Former president Karen Grace will be switching functions with and will take the position of treasurer.

The organization went live with its new website last fall. In the first six months, the archive database had more than 240 users. Grace credited Jim and Rose Marie Blaha for their diligent efforts in logging thousands of items into the database.

The organization launched its newest exhibit, “Boca Grande: Once a Railroad and Industrial Town,” last fall.

“The railroad exhibit has been perhaps the most successful exhibit in recent history,” said outgoing president Karen Grace. “We’ve increased the number of the people who are coming to the History Center significantly. And we did a wonderful program with The Island School related to the exhibit.”

Membership coordinator Mel Csank was happy to report that membership is up this year well over 10 percent.

“We have 427 (and counting) members at this time, and last year we had just over 350 members,” Csank said. “We’re delighted that our community has supported all of our efforts this season. We have exceeded our goals for 2019.”

Grace said there has been a large increase in visitors to the History Center since the exhibit opened. The History Center has had visits and inquiries from other historical societies from 12 different states, Grace added.

The organization launched a free app in January called “The Boca Grande Walking Tour” with 10 historical stops in town.

The Society once again made three presentations at The Island School.

Two board members completed terms this year. Pat Agles, a founding member of the organization, has served several terms on the board, including being president. And Mary Bess, who has worked on the home tours and raised significant funds tor the organization, will also complete her term. Roselle Agles moved away and therefore resigned from the board.

“We thank the Woman’s Club, Mark Spurgeon of Boca Grande Real Estate and Safety Harbor Builders for their support of our archive system,” Grace said. “We’d like to thank our members, sponsors and donors for your support, and we look forward to another active and successful season starting in the fall.”