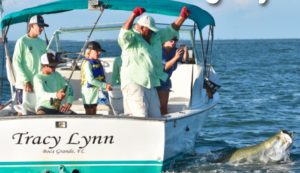 From that moment on the kids and captains in the Kids Classic Tournament were rocking the Pass nonstop until the tournament ended at 8 p.m. There was not one moment in those three hours when someone didn’t have a tarpon on the line, and quite often there were five or six at once.

In all, 81 tarpon were released during the tournament, with the average angler age being 11, and 45 of the 149 kids fishing the tournament were ages 10 or under. Their average release time was nine minutes … and considering many of the tarpon caught were larger than the child holding the rod, that is pretty impressive. Shorter release times result in healthy tarpon releases.

Capt. Sandy Melvin, the man who founded the tournament and Boca Grande Charities, Inc., said the unprecedented releases in this tournament were in good part because of the captains. Conditions were perfect out in the Pass, but congested. The 40 boats participating were drifting in a small area on the Pan, but other than a few tangled lines, everything went smoothly under the eyes of the experienced captains.

“I particularly want to recognize the captains for their professionalism, and how they caught so many tarpon with these little kids and kept them all safe,” Melvin said. “Great job.”

In all, five boats of children sponsored by U.S. Health Advisors participated, thanks to Kids Needs of Englewood. U.S. Health Advisors representatives have played a vital role in the Kids Classic since the beginning, not only by being a platinum sponsor but by coming out to the event to cheer their teams on and help out on the boats.

Leslie Edwards, with help from Gasparilla Outfitters, coordinated that large effort, and it was well worth it to give some of the children of our area who are less fortunate an unforgettable day.

There were also four boats in the tournament with Easter Seals anglers, including one captained by Mike Myers on the Waterline boat. His anglers had some real excitement on their boat and almost took second place. They only missed that honor by eight minutes, as Capt. Waylon released his team’s tarpon that many minutes before.

There were three 6-year-olds competing in this year’s tournament, and one of them was Hudson Coleman, aboard his dad Capt. Charlie Coleman’s boat Casuarina. Hudson’s team released a respectable number of tarpon – three in all – and Hudson’s first tarpon ever caught was one of them.

Melvin said the community support for Camp Margaritaville and the tournament was overwhelming.

“How unbelievable it is how the community comes together for the event,” he said. “We had Fire Chief C.W. Blosser come over on Friday with his guys to get the common grounds ready all day in the heat, and he came with his own family and some of the firefighters at 7:30 a.m. Sunday to help take banners down and clean up. Tom Dixon showed up on 30 minutes’ notice to help hang banners. The Lee County Sheriff’s Office staff were out here all day providing service, and some high school kids volunteered to do an art show. The Lemon Bay football team laid out plywood on the beach for the Easter Seals kids, and Taz Tile and Marble provided the plywood. It was just a great event all around: Records were broken everywhere, kids were helping kids on and off the water, we had great community support, and we don’t think it could have gone any better. Thank you, everyone!”

Sidenote: Just milliseconds after Judge Smitty called the tournament, two more boats hooked up – Phil-Jack and Night Cap. The kids on those boats stayed to fight their tarpon, and both teams released them successfully. While they didn’t count in the tournament, they counted for some great memories.